You are here: Home1 / Alumni 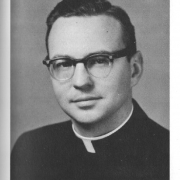 We regret to announce that Monsignor Vincent Keane ’52 has passed away. We mourn the loss of a holy priest, our former teacher and Rector-Principal. May he rest in the Peace of Christ.

Monsignor Keane served at Cathedral Prep, Brooklyn from 1959-1963 as Prefect of Students and as History and Religion teacher. Monsignor Keane then served at Cathedral Prep, Elmhurst from 1963-1979 as Rector-Principal (1974-1979), as well as Prefect of Students, History and Religion teacher, and Spiritual Director.

Monsignor Keane also served the Diocese of Brooklyn as Pastor of the Parishes of Saint Francis de Sales (Belle Harbor), and Our Lady of the Blessed Sacrament (Bayside), Associate Pastor of SS. Joachim and Anne (Queens Village) as well as Parochial Vicar of Saint Pascal Baylon (St. Albans).
The arrangements are as follows: 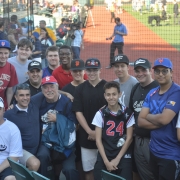 “Remember your leaders, who spoke the word of God to you…imitate their faith.” [Hebrews 13:7]

Cathedral Prep mourns the loss of Monsignor Conrad Dietz. Msgr. Dietz, who was on faculty at Cathedral Prep from 1958-1964. The majority of his priestly service was spent in the classroom and at the pulpit preparing men for a life of service as diocesan priests, deacons, and dedicated husbands and fathers.

We are extremely grateful for his 60 years dedicated service to our diocese throughout his ministry. Please pray for the repose of his soul and the consolation of his family and friends. 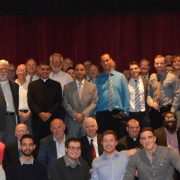 Msgr. Ed Weber of Cathedral Prep NY, John Ryan of St. Pius X and Fr. Joseph Fonti all spoke about their similar experiences and the benefits of establishing a relationship among the different alumni associations.

The bonds of our brotherhood were shared by all, and we look forward to next year! 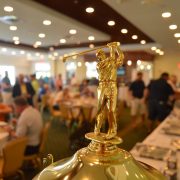 On June 22nd, Cathedral Prep hosted the 24th Annual Golf Classic at North Hills Country Club in Manhasset, NY! With perfect weather, over 90 duffers, dedicated supporters, and alumni came out to enjoy a day on the links.

This year’s winning foursome shot 9 under par and had two alums lead the way.

Congratulations to the following Nearest to the Pin winners:

Congratulations to the Longest Drive winner:

Thank you to the following main sponsors for making this event possible: 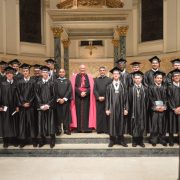 On Graduation morning, Friday, May 26th, our community gathered with the proud parents and family of the Class of 2017 at the Prep to celebrate a Mass of Thanksgiving. Father Joseph Fonti was the main celebrant and Father James Rodriguez was the homilist. Several priests concelebrated: Msgr. John Casey `57 (former rector), Msgr. Regie Pamposa (traveled from the Philippines / uncle of a graduate), and Father Robert Kuznik (Pastor of Saint Isidore, Riverhead). Deacon Ron Ronacher from St. Rita’s (Brooklyn) proclaimed the Gospel.

In the evening Bishop Nicholas DiMarzio presided over our Graduation Exercises at St. James Cathedral in Brooklyn. After singing America the Beautiful, Father Rodriguez, called the community to prayer. Our Rector-President, Father Fonti, `84, welcomed the family and friends of the Class of 2017 and thanked their parents for entrusting Cathedral with their son’s intellectual and spiritual formation. He reminded his spiritual sons that “they can do all things in Christ who strengthens them.”

Arthur Vollmerhausen gave the salutatorian address and Aidan Birth was the class valedictorian. Both men mentioned the “uniqueness” of their class not only in size, “21” but in character. They also highlighted the great gift of the Cathedral brotherhood and the importance of striving for greatness in all things and the need of each member of the class to remain open in future years to the Lord’s call to serve.

Father Chris Bethge was our keynote speaker. A graduate of the Class of 2007, Father Bethge spoke about how his time at Cathedral laid the foundation for his priestly vocation. In his address, he mentioned the ‘the toughness of the world’ and how our graduates will be challenged on the college campus and in life itself. Like a Yankee at Fenway Park he told his fellow Crusaders “to stand confidently at the plate and swing.” Cathedral has prepared them. They are not alone. The Cathedral brotherhood stands with them.

Towards the end of the ceremony after the bestowal of various awards, two special presentations were made. Mr. Mestrandrea, father of freshman, Robert, and owner of Majestic Funeral Home, gave Cathedral a gift in memory of our recently deceased brother, Markus Kotnik. He asked that in some way it be used at Graduation. Father Fonti and Mr. Diaz chose to divide the gift. They selected 4 graduates who were Markus’ “Big Brothers” at Cathedral: Daniel Dugan, Christopher Kircher, Jonathon Oscategui, and Tyler Sharma. Each was reminded to pray for Markus’ parents, Frank and Tina, and to keep his spirit, “Have a great day”, alive. Father Fonti also introduced Christopher Kircher to his new Rector, Father George Sears. Chris has decided to continue his discernment at Cathedral Seminary House of Formation in Douglaston.

Bishop Nicolas DiMarzio concluded the evening by encouraging our young men to be “beacons of love in the world.” By acts of love they will “show this world what God truly looks like.”

Congratulations to the Class of 2017!

The Bronze Medal is presented to a young man who has earned an overall Grade Point Average after four years of study of 95.51, ranking him third in the class. The Bronze medal was presented to Arthur Vollmerhausen.

The Silver Medal is presented to a young man who has earned an overall Grade Point Average after four years of study of 95.54, ranking him second in the class. The Silver medal was presented to Aidan Peter Birth.

The Gold Medal is presented to a young man who has earned an overall Grade Point Average after four years of study of 97.10 ranking him first in the class. The Gold medal was presented to David Vincent Brancale.

The English Award was presented to Arthur Vollmerhausen.

The Latin Award was presented to Aidan Peter Birth.

The Mathematics Award was presented to David Vincent Brancale.

The Spanish Award was presented to Daniel P. Dugan.

The Science Award was presented to David Vincent Brancale.

The Social Science Award was presented to Adrian Grzybowski.

The Theology Award was presented to Connell Friel.

We are proud to announce that every graduate of the Class of 2017 is awarded a New York State Regents Diploma.

An Advanced Regents Diploma was awarded to those students who have successfully passed the Regents examinations in English, Global Studies, U.S. History, and all required sequences in Science and Mathematics. The following students were recognized:

Sponsored by Our Diocesan Newspaper, The Tablet All-Scholastic Team is composed of students who exemplify not only academic excellence, but more importantly, Christian Leadership, involvement and responsibility.

THE SAINT DOMINIC SAVIO AWARD is given in recognition of outstanding dedication and unwavering effort to scholastic achievement and personal growth.

This award was proudly presented to Arthur Vollmerhausen.

THE SAINT JOHN BOSCO AWARD is given in recognition of outstanding school service, personality and interaction with others.

This award was proudly presented to Jonathan Victor Oscategui.

THE SAINT JOHN VIANNEY AWARD is given in recognition of outstanding academic improvement, excellence and perseverance.

This award was proudly presented to Justin Collado.

THE SAINT MICHAEL THE ARCHANGEL AWARD is given in recognition of outstanding protection and outward representation of our school’s core Catholic values.

This award was proudly presented to Daniel Pintor.

THE BLESSED PIER GIORGIO FRASSATI AWARD is given in recognition of outstanding dedication to the Lord’s call to individual greatness and His call to always strive for the highest goals.

This award was proudly presented to Joël Jean Benard Edouard.

THE FATHER DULANEY AWARD is being given for the first time this year in recognition of Father Dulaney, a long-time teacher, assistant spiritual director, and supporter of Cathedral Prep. Fr. Dulaney sadly passed away this year, and we are proud to honor him and his legacy with this award. The Fr. Dulaney Award is given in recognition of outstanding character, loyalty and commitment to school and community.

This award was proudly presented to Aidan Peter Birth.

Congratulations to all the members of the Class of 2017 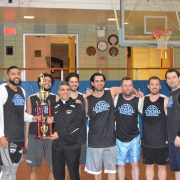 Congratulations to our alumni league, back to back champions, The Knights of Cathedral Prep!

We would like to thank the following alumni teams that played in our league this year: Protectors of the Holy Name The following list is everyone, who came out during the season: 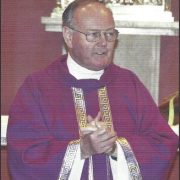 Cathedral Prep mourns the passing of Father William Dulaney, `65. From 2013 till his passing, Father Dulaney met with every freshmen, for spiritual direction, on a weekly basis. Over his 22 years of service in multiple roles (teacher, Vice-Rector, and Spiritual Director) at Cathedral, Father Dulaney was dedicated to his alma mater. We ask that you pray for the consolation of his family and friends, as we prepare to say goodbye to one of our Men of Greatness. 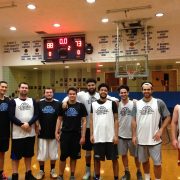 The Knights of Cathedral Prep won their 2017 Cathedral Alumni Basketball League opener in a rematch of last year’s Championship game versus the Warriors of St. Michael.  After a tight first half (45-43), the Knights pulled away earlier in the second half led by Mike Liander, ’05, who had a game high 44 points.  JT Sprague, ‘05 scored 22, and Chris Liander, ‘10 added 14.  Thomas Czaplinski, ’01 led the Warriors with 18 points.  The final score was 88-73.

In the CABL opener, the Defenders of the Faith won a thriller over the Protectors of the Holy Name 57-53.  Led by Connor Gallagher, ’12 with 24 points, and great team passing by Johnny Starace, ’12 and Eugene Reynolds, ’12(who also hit a key three late in the game) along with the strong board work of Thomas Early, ’08, and Dan McQuail, ’09.  The Protectors of the Holy Name were led by Rich Rodriguez, ’15, who chipped in 16 points and Juan Martin, ’12, adding 13 points – all in the second half.
A big welcome to our newest additions to the league, recents alums:  Lenny Lynaugh, ’16,  Brian Hickey, ’16, Ed Whitmore, ’16 and David Gaskey, ’16. 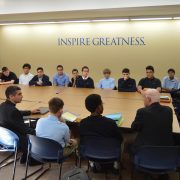 Prior to celebrating All Saints’ Day Mass for our community, Bishop Raymond Chappetto, ’65, came home to tell his personal vocation story to the young men in the Pier Giorgio Frasatti Discernment group. In telling his unique story, Bishop said, “as I got to know my parish priests and saw all the good and helpful things that they did for the people in my neighborhood, I said, “I too want to be a priest””. Six years after he graduated Cathedral, Bishop Chappetto was ordained to the priesthood. Today, he is not only an esteemed alum; he is the liaison between the Diocese of Brooklyn and Cathedral Prep!